Polluted lungs are easy prey for respiratory diseases. So it’s no surprise that people suffering from poor air quality are more likely to become severely sick or die from COVID-19. This is deeply troubling in a state such as California, which has the worst air in the nation and is home to seven of the top 10 most ozone-choked cities in America.

During the Great Recession, some of the largest employment gains came from policies to expand clean technology.

As if that weren’t enough, structural inequalities are causing communities of color (PDF), and African-Americans in particular, to be hit hardest by COVID-19. If you’re black or a minority in America, you’re more likely to die from COVID-19 than if you’re white. This is tragically predictable and, in the case of air pollution, entirely preventable.

It’s predictable because we know what’s causing air pollution: the single largest source in California is the transportation sector and diesel-burning trucks are a major contributor. And, although late, prevention is happening: New regulations at the California Air Resources Board, such as the Advanced Clean Truck Rule, will get dirty diesel trucks off the roads and build a zero-emission electric truck market. These forward-looking regulations not only will provide health benefits but also will stimulate the economy and deliver much-needed stability.

Unlike the federal government, which continues to ignore science and attack life-saving environmental laws, California repeatedly has shown that cleaning up air pollution can drive economic growth. The clean technology sector, anchored by strong regulations, is one of California’s most important industries that support over half a million jobs statewide (PDF). Clean technologies, such as electric vehicles, are a top state export and an invaluable source of innovation. Environmental regulations that continue to encourage the electric vehicle market, among other clean technologies, are the foundation of California’s future economy.

The volatility of the global oil market and its impact on livelihoods underscores the urgency to cut the fossil fuel cord.

As California reimagines its economy, there are valuable lessons from the past. During the Great Recession, some of the largest employment gains came from policies to expand clean technology. As we rebuild society, we must focus on the technologies of the future instead of burdening ourselves with the failures of the past.

Stability and a resilient recovery

One of the biggest failures is linking the U.S. economy to the whims of autocratic rulers overseas. The volatility of the global oil market and its impact on the livelihoods of hardworking Americans underscores the urgency to cut the fossil fuel cord.

It’s all too common for the global oil industry to becomes mired in crisis, prompting wild price swings and mass layoffs. The men and women working long hours in oily mud, and the families that depend on them, deserve better. They deserve stability. They deserve policies that promote new, innovative domestic industries, such as electric vehicle manufacturing, that will curb our oil addiction and are immune to Twitter tantrums or foreign wars.

One study found that in California alone, electrifying trucks and buses would result in almost 2 million new jobs and hundreds of billions in direct investments through 2050. Environmental regulations, such as the Advanced Clean Truck Rule that accelerate transportation electrification, are vital to a resilient recovery.

But it’s not just jobs. Lower fuel costs from filling up with electricity instead of fossil fuels means more money to invest elsewhere — money to reinvest in businesses and workers. Not only that, but take a look at the chart below and tell me, if you’re a transportation company, would you rather make decisions based on the erratic price of fossil fuels or the flat, boring price of electricity? 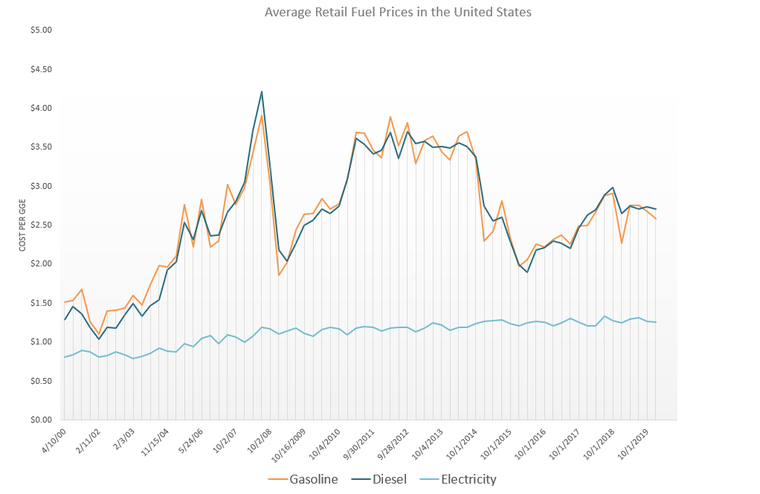 Imagine if each month your utility bill was entirely different. You wouldn’t know how much to budget for bills. Instead, you’d be forced to have enough money on hand to cover a high bill or risk having your service shut off. The same applies to companies that depend on gas or diesel to fuel their vehicles. By switching to a more stable fuel source such as electricity, companies can reduce risk and free up capital for strategic investments.

From a mountain of despair, a stone of hope

In a matter of months, we went from record employment to millions of Americans filing for unemployment. Meanwhile, countless businesses — and the people they employ — are barely staying afloat, clinging to solvency through sheer grit and the hope that political leaders act decisively to set us on the path to a sustainable recovery. In this challenging time, there is a renewed resolve for essential environmental protections to help us emerge from the COVID-19 crisis a more resilient society that grows jobs, safeguards public health and protects our climate and the air we breathe.