This is an article from Gemma Renton

Car pollution is having a huge impact on our environment, affecting everything from the size of the hole in the ozone layer to the health and wellbeing of the general public, with vehicle air pollution contributing to the rise in individuals suffering from acute respiratory conditions around the world. One of the most devastating impacts of increased motor vehicle use is the increased level of pollutants it is releasing into our air and atmosphere.

Carbon dioxide is the dominant greenhouse gas that causes global warming, which is causing havoc amongst our weather systems, and the average American vehicle with a 3 liter engine releases over 10,000 pounds of this into the atmosphere each year (hybrid vehicles, such as the vehicles we use, are able to reduce this figure to between 4,000-5,000 pounds). Motor vehicles also release carbon monoxide, sulphur and nitrogen oxides, hydrocarbons and lead into the atmosphere. This dangerous cocktail of chemicals can have negative impacts on your heart health, respiratory wellbeing, and in many forms hydrocarbons have even been shown to contribute to the development of cancer and certain birth defects. All of these pollutants are those that escape from your tailpipe every time you turn on your engine, and don’t include the myriad of pollutants and environmental damage caused by the auto motor construction industry each year, in order to meet our demand for new cars. 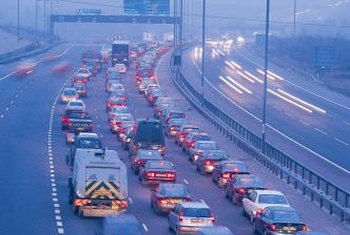 As well as the obvious impact to the environment of taking even just one car off the road, there are many other benefits of choosing to give up your car and instead use public transport, carpooling, or private eco transportation companies such as our own:

Just one century ago, the average American walked for three miles every day. Now, even the most health conscious amongst us are likely to jump in the car to the gym to get on a treadmill if we feel like walking for three miles. The fact is that the convenience of car ownership has made us lazy, and this is having many negative implications of our overall health and wellbeing. America is struggling with an obesity epidemic, thanks to a general public whose daily exercise intake is in rapid decline: this decline has been impacted by the ease of jumping in the car to reach your next destination, rather than choosing to walk or even cycle if your destination is just down the block. When you choose to give up your car, you’ll be amazed at how much more you walk, how convenient and easy walking short distances is (without the added hassle of having to find a parking space when you reach your destination) and you’ll quickly see that your health and fitness levels will increase too.

An added bonus of giving up your own car is that it can actually help to save you money in the long run, as well as giving you an immediate cash injection when your car is sold (ideal if you need to pay of some bills, clear debt, or simply have other expenses that you’re struggling to cover after the excesses of the holiday period). People often assume that it is cheaper to drive from A to B than it is to use public transport but, in reality, when you factor in the cost of parking, gas, car maintenance, and the other expenses involved in being a motorist, it is actually much cheaper to simply hop on the bus or on the subway. What’s more, thanks to specific carpooling lanes (which can also be used by taxi shuttles) and bus routes, you’ll probably get to your destination much quicker if you choose to use public transport than if you sat in traffic and congestion in your own car. So how much does owning your own car actually cost you?  AAA reports that owning and driving a car costs $11,000 per year, and whilst this figure will vary depending on the annual mileage you cover and the age of your vehicle, it’s certainly much more expensive than the cost of an annual transit pass in any American city. The fact is that choosing not to own a car of your own will almost certainly save you money.