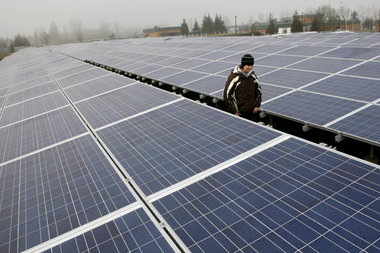 Thomas BoydSolar energy panels, such as this one at Gresham’s wastewater treatment plant, along with bus passes and efficient heating systems are among the projects that qualify for tax credits under Oregon green energy subsidies.

By Harry Esteve, The Oregonian SALEM — A free-for-all reputation shades Oregon’s green energy incentives, which offer hundreds of millions of taxpayer dollars for everything from experimental solar panels to employee perks at some of the state’s richest companies. Yet lawmakers struggling to find money for schools and health care appear as reluctant as ever to jettison a program seen as one of the few that brings jobs to Oregon — even though firm job numbers have proven elusive. “It can be and has been an important economic development tool,” says Rep. Tobias Read, D-Beaverton, who serves on a committee studying all state tax breaks. “Part of it is the message we’re sending to rest of world, that we want Oregon to continue to be an attractive place” to develop renewable energy. Tobias and other supporters say the Business Energy Tax Credit, sometimes known as the Betsy for its BETC initials, works as a lure for solar, wind, biofuel and other renewable power start-ups that otherwise would have passed Oregon by. 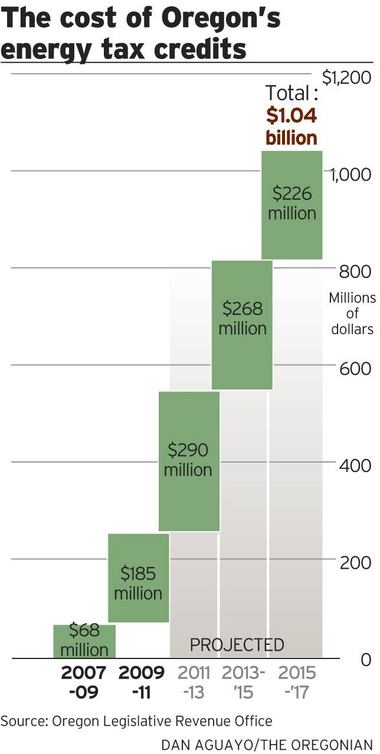 But records examined by The Oregonian show the program has been treated more like a state-sponsored ATM machine by hundreds of companies. Want to gamble on a solar megaplant? Get a tax credit that pays half the cost. Need a new heat pump? Cut your upfront costs by more than a third with a state credit. State documents show it doesn’t matter whether a company needs the help. Nor does it matter how speculative its plans are, or how much energy it saves or produces — the tax breaks flow. Here are some examples from Oregon Department of Energy records:  Oregon gave away $10 million in tax dollars to provide bus passes for dozens of businesses, including Intel, Nike and Stoel-Rives, the state’s largest law firms.  Of the 10 companies with the most employees in Oregon, eight have received energy tax subsidies totaling $16 million. Among them: Precision Cast Parts, Portland General Electric and Columbia Sportswear.  SolarWorld, which already received $22 million in tax credits, is in line to get $74 million more, making it the clear leader in nabbing multiple state energy subsidies.  Alfred Fairbanks, a dentist in Washington with no energy development experience, has been pre-certified for $10 million in tax credits for his plan to build a massive solar panel array in eastern Oregon. “We’re not paying attention to what we are getting for the money we are spending,” says Jody Wiser, a frequent critic of the credits who runs a watchdog group called Tax Fairness Oregon. “You get in a situation where someone says, ‘I’m going to build this cool green energy thing’ and everybody throws money at it. Nobody is really there watching with great care.” The net result has been an explosion in state spending on the tax credits. The latest estimates, contained in a recently released state report, show the subsidies will cost Oregon’s general fund nearly $300 million over the next two years. That’s a 60 percent increase over current spending and quadruple what the state shelled out just four years ago.

The Cost of Green

Green energy isn’t just a moral imperative, politicians say. It creates jobs. But how much do Oregon’s green energy subsidies really cost? And what do we get for our money?

Reporters Ted Sickinger and Harry Esteve have examined those questions over the last several months, plowing through records, interviewing experts in government and business, and analyzing what they found. This series builds on their earlier reporting the past two years.

Day 1: The world’s largest wind farm gets $1.2 billion in subsidies and will generate 35 jobs.

Day 2: No one can say how many jobs Oregon’s energy tax credits have created.

Such growth dwarfs that of other state programs. The run-up in energy subsidies stands out starkly against a backdrop of Oregon’s deep recession and multibillion-dollar budget shortfall. Efforts by lawmakers to rein in the program’s cost have slowed its exponential growth. Until last year, the credits were handed out like entitlements — if a company qualified, it got a credit. After stories in The Oregonian noted abuses of the program, such as credits going to out-of-state truckers and companies that saved little or no energy, lawmakers ordered tighter restrictions, cut subsidies for wind and placed a $500 million cap on the credits. That hasn’t slowed the crush of applicants. And the Energy Department continues to approve hundreds of tax credit applications. From Jan. 1, 2010 to Jan. 1, 2011, the department gave final approval to $108 million in credits. (Oregonian Publishing Co. was pre-certified last year for a tax credit worth about $45,000 for energy efficient lights.) If the subsidies were discontinued today, they would still cost the state more than $100 million a year at least until 2017, according to the Legislative Revenue Office. That’s because the projects that were promised tax credits will take time to complete and the credits are spread over five years after completion. State revenue officials estimate that in the decade between 2007 and 2017, Oregon will have spent more than $1 billion in tax dollars on green energy incentives. One reason the tax breaks have not just survived but multiplied is that the cost to taxpayers and the state general fund is partially hidden. There is no line item in the state budget to pay for the subsidies — the state simply goes without the money for the credits. Lawmakers don’t make a direct decision to spend $100 million on SolarWorld instead of on public schools as they must do with other state services. The incentives appeal to both political parties. Democrats like them because they promote green energy. Republicans like to see taxes benefit private business. “We’re not just giving money away,” says Rep. Vicki Berger, R-Salem, who serves as co-chair of the committee responsible for overseeing state tax credits. “We’re using tax policy to drive private sector investment.” The tax credits cover three broad areas — conservation, renewable energy production and renewable energy manufacturing. Incentives for conservation and renewable energy production are scheduled to sunset next year, but could be extended by the Legislature. Incentives for manufacturing are supposed to sunset in 2014. The Legislature has a history of extending tax credits and the current crop of lawmakers doesn’t appear to be in any hurry to see them disappear. Ditto for Gov. John Kitzhaber, who wants to extend the breaks as part of his effort to put people to work thinning forests and burning the debris to generate electricity. Even Sen. Ginny Burdick, D-Portland, one of the most outspoken critics of the credits, isn’t ready to let them expire.“You’re going to see changes and certainly a narrowing down would be my guess,” Burdick says. “But I would be surprised if we ended the program altogether.” Incentives for green energy have become a national juggernaut. President Barack Obama has called for a huge increase in federal tax breaks and grants for conservation and renewable energy developers as part of his “win the future” effort. States, meanwhile, compete with each other for the prettiest package of subsidies for a new wave of solar panel manufacturers. Oregon offers some of the nation’s most lucrative incentives and loosest requirements for getting them.

The Oregonian’s continuing coverage of the Business Energy Tax Credit.SolarWorld, a German company that makes solar energy components, was lured to Hillsboro with the promise of a $22 million tax credit, along with other federal and local tax breaks. Since setting up shop, however, it applied for — and is expected to receive — four more tax credits that will push its total state subsidy to $100 million. The additional subsidies are being awarded to SolarWorld for adding equipment to the plant’s production line. It’s all within the rules the Oregon Department of Energy spells out, says Ben Santarris, U.S. spokesman for SolarWorld. “You have to appreciate the competitive situation as well as the fundamental energy issues — for the economy, environment and security — that exist for solar manufacturing throughout the world,” Santarris says. “Oregon’s approach has allowed it to be strong.”The tax incentives also allow unlikely entrepreneurs to take a chance on green energy projects because the credits — combined with federal subsidies and local property tax breaks — limit personal financial risk. Pullman, Wash., dentist Alfred Fairbanks said the subsidies are critical to the solar energy project he is trying to build in the Christmas Valley area of Lake County in eastern Oregon. The remote region, with its vast, cheap acreage and wealth of sunny skies, has attracted other solar speculators as well, including Obsidian Finance Group, a Portland accounting firm, and Element Power, an international renewable energy company with a headquarters in Portland. Fairbanks won’t get final approval for his $10 million Oregon tax credit until he completes the project. So far, he’s set up some of the poles that hold the solar panels. He attached some panels, but later took them down. He says he’s having trouble lining up agreements for shipping the power with the local utility and with the Bonneville Power Administration. He acknowledges he’s never attempted such a thing before. “It’s a family business,” Fairbanks says, noting he works with his sons. “It’s about being green and providing solar electricity, which we think is the wave of the future.” He apologizes and cuts short the interview, explaining, “I’ve got patients waiting.” — Harry Esteve