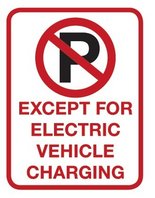 View full sizeThese new signs are expected to start popping up around Portland in the near future.

The Portland City Council is expected to adopt a resolution Wednesday that would enact an eight-step plan to usher in an electric-vehicle future on the city’s streets and driveways.

Among other things, the resolution (PDF) calls for “supportive city policies” such as designated parking rules and streamlined permitting for public charging stations.Under the resolution, the city would also develop a program to make it easier for garage-less electric car owners to charge their eco-rides at home.

From the report accompanying the resolution:

“A significant number of homes, apartments and condominiums in Portland do not have off-street parking that is generally required to install a home charging unit. The city beleives every resident of Portland should have access to the benefits of EV’s if they choose.”

Additionally, the city says it is exploring partnerships to retro-fit and market underutilized parking spaces to serve EV owners who do not live within reasonable distance to a city-owned garage.

“Allowing residents that lack access to off-street home charging to use these lots to charge presents a unique opportunity to use the parking spaces that would otherwise sit empty at night.”

The report says City Hall is also pursuing a first of its kind relationship with Zipcar, allowing members of the car-sharing service to reserve time at charging stations.

Hoping to meet meet emission-reduction goals outlined in the Climate Action Plan adopted last year, the city says electric vehicles must account for 13 percent of all non-commercial vehicle miles traveled in Portland by 2030.