The White House is celebrating Christmas this year with recycled ornaments, energy-saving LED tree lights  and natural materials, including dried hydrangeas that were previously used in floral arrangements. 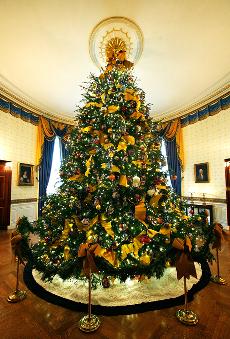 “Reflect, Rejoice, Renew” is the theme for the Obama family’s first Christmas in the White House, First Lady Michelle Obama said Wednesday as she gave the media a holiday preview. She explained why:

For the Obama family, Christmas and the New Year has always been a time to reflect on our many blessings, to rejoice in the pleasure of spending time with our family and our friends, and to renew our commitment to one another and to the causes that we believe in.  And I wanted to continue that part of the tradition during our first holiday season here at the White House.

For the 18-foot tree in the Blue Room, 800 ornaments from previous administration were taken out of storage and sent to 60 community groups nationwide to be decorated in tribute to favorite local landmarks. Among the landmarks honored: the Statue of Liberty, Mount Rushmore, the Kennedy Space Center and the Lincoln Park Zoo in Chicago, the First Lady’s hometown.

The decorations also include a 400-pound gingerbread replica of the White House, covered in white chocolate, and a small replica of Bo, the Obama family’s Portuguese water dog.

In addition to the East Wing and residence staff, 92 volunteers from 24 states spent 3,400 hours decorating the White House, which expects 50,000 visitors for the holidays.

To keep the environmental theme, CNN reports that six of the trees on display at the entraces will be replanted after the holidays by the National Parks Service.