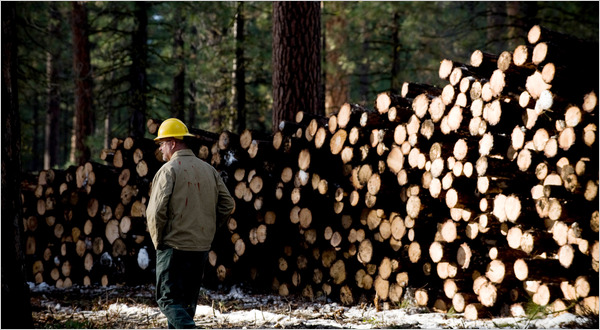 Logs cut to thin the Deschutes National Forest in Oregon, an effort to promote sustainability.

SISTERS, Ore. — A patch of ponderosa pines here in the Deschutes National Forest has been carefully pruned over the last few years to demonstrate the United States Forest Service’s priorities in the changing West: improving forest health and protecting against devastating wildfire while still supporting the timber economy.

Yet occasionally, when tour groups come through, someone will ask what role the trees might play as the nation addresses global warming. After all, forests soak up carbon dioxide as they grow.

“We’ve always said that’s outside the scope of this project,” said Michael Keown, the environmental coordinator for the Sisters Ranger District, which includes more than 300,000 acres in the Deschutes forest in central Oregon. “But those days have come and gone.”

The giant evergreens of the West have long been proclaimed essential, whether the cause was saving salmon and spotted owls or small towns and their sawmills. Now, with evidence showing that American forests store 15 percent or more of the carbon gases produced in the nation, expectations are growing for them to do even more.

Over the next 50 years or so, experts say, some forests could be cultivated to grow bigger, more resilient trees, potentially increasing their carbon storage by 50 percent and providing an important “bridge” to a time when the nation will theoretically have shifted away from greenhouse-gas producing fossil fuels.

But even as some private forests are already being marketed as “carbon sinks,” or storehouses, that could play a role in a future carbon cap-and-trade program, government agencies and academics are struggling to understand and measure how carbon is stored and released. After decades of controversy surrounding the management of forests, debate persists over how they can best be used to fight global warming while also being protected from their threats, including more and bigger wildfires.

“While healthy, functioning forests may serve as a means to sequester carbon, under current practices, many of our Western forests are at risk of turning from a carbon sink to a carbon source,” Tom Tidwell, the head of the Forest Service, told a Senate subcommittee on Nov. 18 in a hearing on forest management and climate change.

“Projections indicate that while these forests continue to sequester more carbon in the short-term,” Mr. Tidwell said, “in 30 to 50 years, disturbances such as fire and insects and disease could dramatically change the role of forests, thereby emitting more carbon than currently sequestering.”

The challenges and benefits range by region. Studies show that the potential carbon capacity of the predominantly fir forests on the wet west side of the Cascade Range in the Pacific Northwest is at least three times as high as that of the drier regions over the mountains and to the southwest.

Many drier forests, including here east of the Cascades, have grown unnaturally dense after logging and efforts to save them from wildfires. Experts say measures taken to stop fires can end up causing more devastating ones by allowing the growth of small trees and underbrush, “ladder fuels” that ignite bigger trees.

On federal lands, the Forest Service has recently emphasized removing ladder fuels, including in the demonstration project here in the Metolius Basin.

“The suite of things we’re doing benefits the carbon sequestration,” said Brian Tandy, who helps oversee forest growth in the Deschutes. “We weren’t doing it to address some of that specifically, but the way we’re moving is sort of in line with that.”

Still, after years of fights over logging practices, including lawsuits to reduce clear cutting on federal land, distrust of the Forest Service’s motives remains. Mr. Tandy made a point of saying that one reason he does what he does is to help meet “society’s needs for wood products.”

Beverly Law, a professor of global change forest science at Oregon State University, pointed to the Deschutes project as an example of the Forest Service protecting against climate change while potentially improving carbon storage. Yet Ms. Law also said fire officials should not presume that what might keep a forest from burning will enhance it as a carbon asset.

“There’s this opinion out there that when people see smoke from fire, they think it’s all going up in smoke — well, no, it’s not,” Ms. Law said, referring to forests that experience relatively low-intensity fires, a common dynamic in dry areas like central and eastern Oregon and parts of California. “Only 5 percent of the total ecosystem carbon is going up in smoke. When you talk about trying to prevent that, it’s not as big a carbon pulse to the atmosphere as people think.”

Ms. Law, along with Mark E. Harmon, a professor of forest ecology at Oregon State, and others say that forest policy should be tailored to individual forests and that the risk of carbon released in a wildfire should be weighed against the carbon costs of trying to prevent fire.

“They say they have to do thinning all over the place because they say fire might happen here,” Ms. Law said, “but it might not happen for decades.”

The math only gets more complicated. Newer, ostensibly environmentally friendly efforts to use cleared brush and small trees as biofuel could potentially release more carbon through transportation and processing than if the material were simply burned in the woods. By the same token, removing a completely burned forest can end up releasing more carbon than if the dead trees are left alone.

Others counter that thinning and fire prevention efforts now under way will have long term benefits, even if they release some carbon initially.

“You can regain that emitted carbon and actually put on even more carbon by redirecting the growth in the forest to the large trees that you leave in the forest — and you avoid the substantial emission of carbon you’d have in a wildfire,” said Malcolm North, a research ecologist at the Forest Service’s Pacific Southwest Research Station and an associate professor of forest ecology at the University of California, Davis.

In his comments to the Senate subcommittee, Mr. Tidwell pointed out that while the Forest Service manages vast tracts of the West, private landowners control the majority of forest land in the United States. Still, said Andrea Tuttle, the former director of the California Department of Forestry and Fire Prevention, the government has a different obligation than private owners.

“The Forest Service as a public agency should be managing the forest for the people,” Ms. Tuttle said. “Part of that is to make them resilient to climate change and at the same time find opportunities where appropriate to use the forest as a carbon sink.”